It's been some time since Annie left the residential arm.  3 months stuck in the dock had taken it's toll and Annie was looking rather tatty - particularly inside, with coal dust, sawdust, bags of recycling and the like filling every space.  A few hours tidying at the end of march means I can now take an internal picture without too much embarrassment!


Looking aft from the front door: 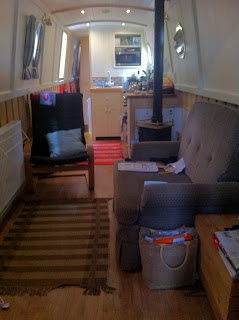 Looking forward from the Galley: 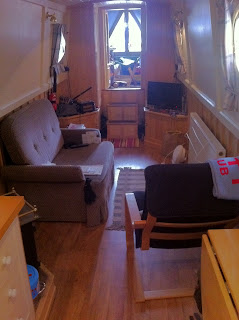 26th of March saw the arrival of my new neighbours.  Great to have some company and good luck to them on their new liveaboard lifestyle.  I've already benefited from Pimms and Cake!

The following day I was finally let out from under the footbridge for my first journey of the year.  Amazing weather knocking 20 degrees!!  Great (if rather familiar)view whilst leaving the dock. 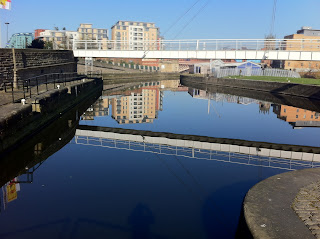 Swinging right into Leeds lock things weren't quite so rosy.  Once into the lock beside another narrowboat it quickly became apparent we weren't going anywhere very fast.  The electrically powered lock decided to lock us in as the paddles stuck down.  This meant we couldn't drop to river level and spent the next 45 mins waiting for Mr BW to come and help us out.  No rush so just chatted with the other boat and sat on the lock with a coffee.  Even the river equivalent of roadworks couldn't spoil the fun! 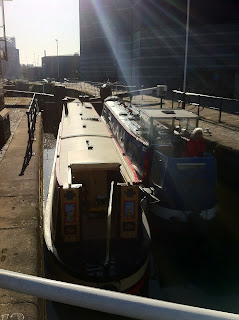 And out the other side... 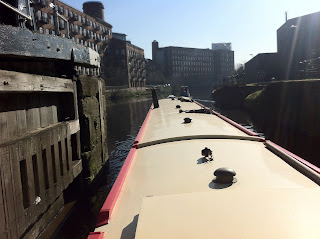 Once out the other side first stop Leeds Lock Facilities.  Stopped on the pontoon and did my stuff.  And then started the unenviable task of cleaning my cratch!  All the junk was dragged off, including several tonnes of Ash, recycling, rubbish and wood!  And then a bit of magic with the mop and Bingo! 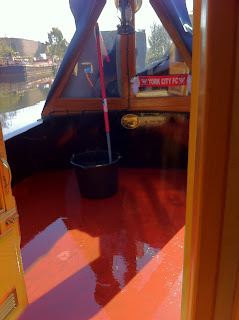 Once all sorted out I continued downstream at snails pace and turned just beyond Knostrop Flood Lock.  River very shallow and muddy today so took a while to wind.  Barge pole useless in this mud! 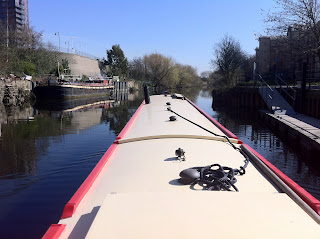 After a couple of nights on the visitor mooring it was up to Granary Wharf to meet Matt, Caleb, Amber and Sienna for a bit of fun. 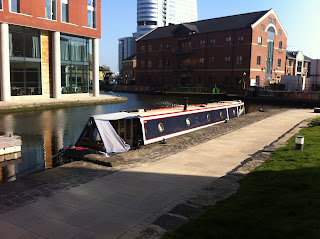 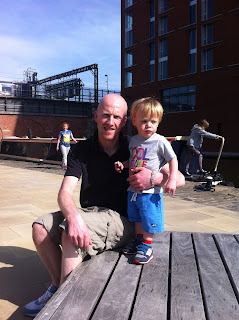 After some unsuccessful fishing with the nets they all seemed very keen to have a go so we set off into River Lock with clear instructions to keep all limbs in the cabin!  Once out the lock Sienna had a crack at driving and within seconds was telling me how easy it was.  A natural!  And Amber too was very capable.  15 mins later we were back at Clarence Dock without incident. 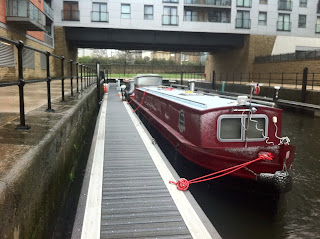 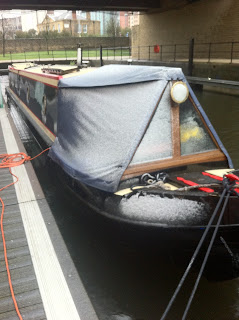 A few more nights to do and then we're scheduled for a Service at Rodley.  Looks like it could be an interesting battle against the wind!
Posted by Unknown at 11:41 No comments:

Finally some real chilly weather!  The main dock has frozen quite impressively (3rd Feb) and the ice is now approaching the front of my boat. 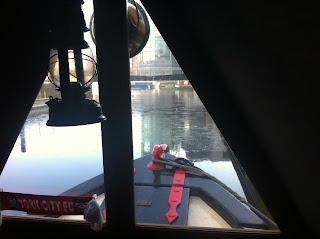 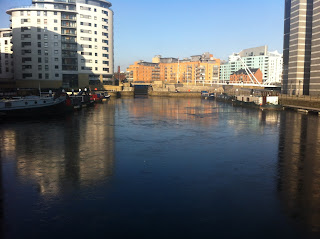 Sleet in the Boulevard 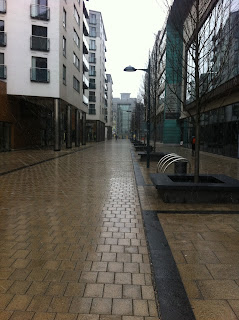 Plenty of snow the following day 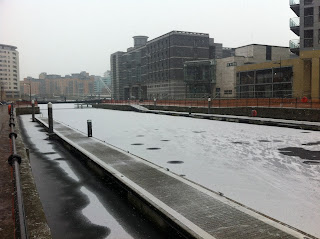 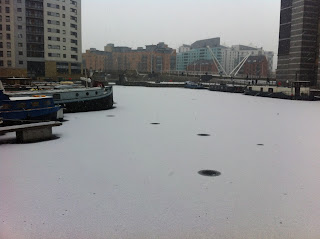 4th Feb - By the end of the week I was locked in tight.  When turning over in bed you can hear the ice splitting! 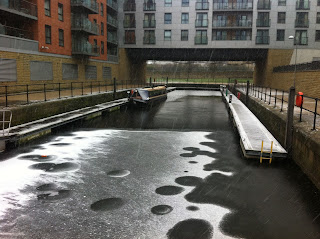 Braemar now - Don't think it's that snowy up there!
Posted by Unknown at 09:44 No comments:

An important year this one - Glad I 'll have enjoyed 2 years on the water by the time things come to an end. :-)

Christmas and New Year was all good - and best wishes to you all - although plenty of time was spent at work but did have a few days before & christmas day off .  However it seems winter hasn't really arrived and in it's place we have windter which for me is way more problematical.  65mph winds in the new year (when scotland nearly blew away), and 55mph again last weekend.  I've lost another Chimney Hat (now wired to chimney - and I have a big magnet to retrieve anything else I may lose overboard!) , worn away part of the cratch cover with ropes and snapped a fairlead due to the Wind.  On the leisure moorings a pontoon was damaged and subsequently removed - and our resident submarine had their Aerial snapped in half! 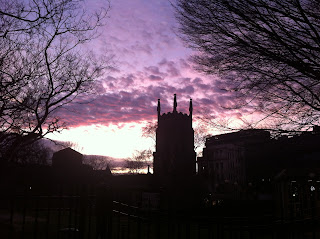 As well as the windy weather we've also had a couple of weeks locked into Clarence Dock with the Aire being high.  Highest I've seen it since arriving last April, over the footpath at Crown Point Bridge and almost over Leeds Lock and back into the Aire

Terrible picture but note the water spilling over the left back into the river. 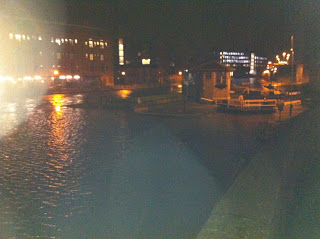 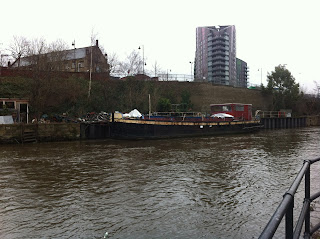 Finally managed to visit the Royal Armouries at Clarence Dock.  It is worth a visit, but doesn't really create the same atmosphere as the Tower of London.  Still need to visit again to take a look round the upper floors.

Aerial View of Annie on Visitor mooring from Armouries: 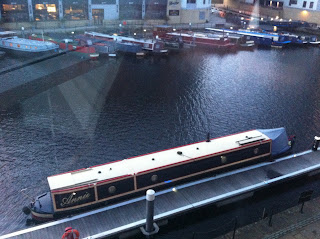 As you can see I never made it back to my official mooring - at least until last Tuesday.  Thought i'd try and get back incase everything froze over.  Of course after arranging to have the footbridge opened to get back in, I woke up to a few centimetres of ice on the side of the boat, and a quite sturdy sheet of ice across the dock!  Beautiful calm morning but  SUPER cold.  I had fun reversing slowly through the ice into my spot.  The crackling, gurgles and popping noises from the breaking ice was really quite fun - but did make getting past Lyra (hard not to call it lycra) sticking out on the pontoon an interesting maneouvre as I can't steer in reverse and the ice pushed me off course!

The scene of devastation following my manoeuvres through the ice. (Lyra to the right) 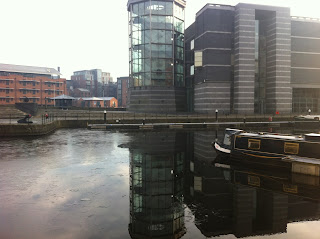 Back under the footbridge into the residential arm 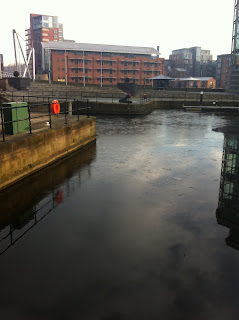 Annie back on my official mooring - Frozen Cratch (ouch!) 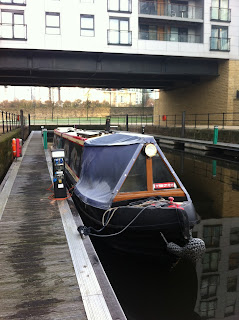 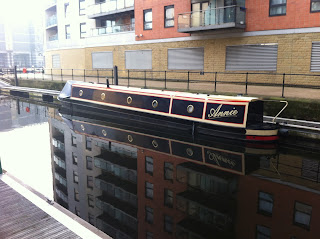 So far no alien objects on the roof (been back in 1.5 weeks) - just a bit of noise as expected friday/saturday night.

I have a new neighbour due to arrive soon too which should nice - no details yet but hope we're talking about a narrowboat rather than something huge!